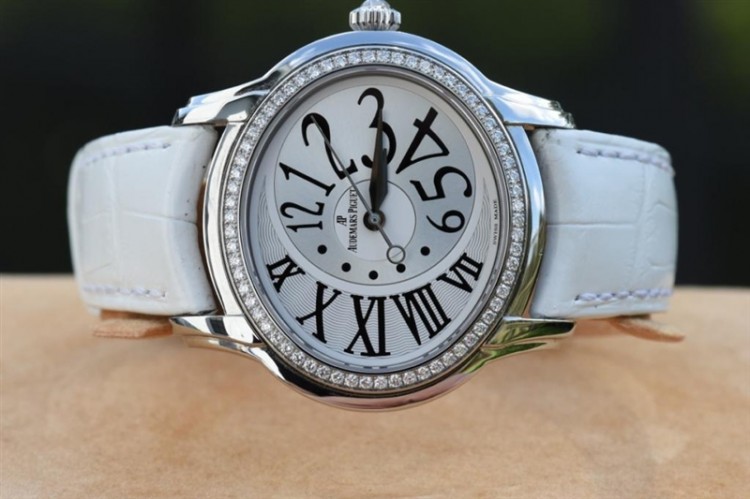 Richard Mille has long won a place among companies bringing new and avant-garde materials to the replica watches industry, such as ceramics, forged carbon and quartz TPT. With its new, exclusive grey Cermet material in the newly released RM 11-05 Automatic fly back chronograph GMT, this automotive and aerospace influenced brand further strengthens its reputation as a materials innovator.
As is often the case with Richard Mille’s ultra-complex timepieces, the RM 11-05 packs many functions inside its 50-mm x 42.7-mm tonneau-shaped case, all driven by its skeletonized, self-winding movement: a flyback chronograph with counters at 6 and 9 o’clock; a GMT display with a luminous hand, easily adjustable by a pusher; and an annual calendar with a semi-instantaneous large date display at 12 o’clock and months indicated by Arabic numerals on a scale between 4 and 5 o’clock. The chronograph, operated by sleekly designed pushers between 1 and 2 o’clock and between 4 and 5 o’clock, also consists of a countdown mode, which uses a 60-minute-marked skeletonized disk in place of a hand so the user can read minutes elapsed and remaining minutes.
The warm gray color of the Cermet case comes from its mixture of metallic zirconium with high-performance ceramic inserts, heated and pressed together into a homogenous whole and notably excluding elements such as nickel and cobalt — normally used in this family of hard materials but deemed “undesirable binders” by Richard Mille’s partners, the micro-technology firm IMI Group, in its mandate to adhere to Europe’s REACH standards of chemical security.

Grey Cermet, whose density is less than that of titanium and whose hardness is 2,360 Vickers — nearly equal to that of diamond, at 2,400 Vickers — is the result of a process called “flash sintering,” which adds a series of powerful electric pulses to the classic hot stamping process. The substance, used in ballistics, aerospace fuselage components, and brakes for competition vehicles, is here applied to the replica watch’s bezel, which is added to a caseband made of carbon TPT and a back made of grade 5 titanium.
Richard Mille’s Caliber RMAC3, visible behind the caseback’s barrel-shaped sapphire window, is decked out with all the technological advancements for which the brand has become known, which include a skeletonized baseplate and bridges made of grade 5 titanium; the variable geometry of the rotor allows the main spring to be winded horizontally according to the user’s activity;50 hours of power storage in twin barrels for longer term performance; Titanium spline screws (also used for housing assembly) for greater torque control.